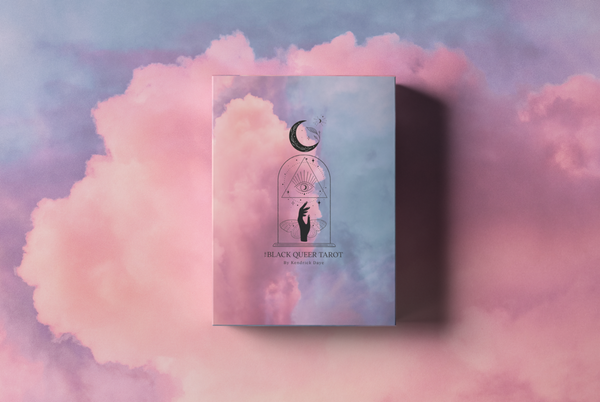 Challenging outdated, non-inclusive decks of the past, the BLACK QUEER TAROT takes the traditional 78-card Tarot arcana and remakes them with a diverse cast of muses.

Pairing the mission of creating work that centers Black queer people with Harlem-based artist Kendrick Daye's signature analog collage technique results in a fresh, inclusive take on the Tarot that imagines worlds where liberation and freedom are alive and well-connected bedfellows. Worlds where Black queer people are not just living--we're thriving.

From the Creator - Why The Black Queer Tarot?

I used to always equate anything remotely “spiritual” with religion, and religion never felt like a home to me as a Black queer man, so I would reject anything that felt like it. More recently, though, I've begun to see myself as spiritual and my art as a spiritual practice in itself. In the search for myself I've dabbled in astrology, numerology, life-path numbers and more recently tarot.

I initially was looking for a deck for myself and I couldn’t find anything that mirrored my world. If I found a queer deck, white figures were depicted primarily. If I found a deck with Black figures depicted, they were cisgender. I wanted something that could fit both of those worlds. People sometimes ask me if I’m more of a Black person or more of a queer person. Those questions make no sense to me because I show up in the world as both. I can’t compartmentalize. I get that other people can do so with certain aspects of their identity, but to me, both of those parts make up who I am. And I wanted a deck that reflected that.

When I see people doing readings on social media, it's usually with decks featuring faces that don't reflect their own. I think those readings, which are already so powerful, can be even more potent when the faces reflect both the reader and the intended audience. These Even new versions are so necessary for giving communities that are normally ostracized a chance at seeing accurate depictions of themselves in the media.